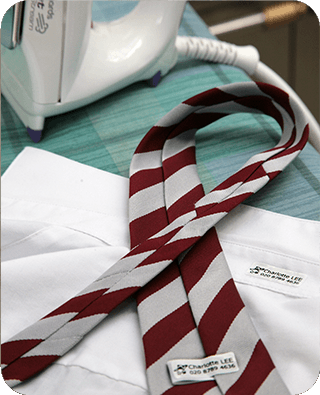 I like to be positive. It distresses me to be negative. I don’t always manage it but I do try. It’s one thing I learnt from a manager who was forever rocking in from the current training course and trying out the latest lesson on us. Mostly this habit drove me mad but one day this manager asked me to talk up the positives of a certain issue and it really can change your perspective.

So I’m very happy to be writing this post as it won’t require much positive visualisation. I have a good review of a product: YAY! I swore this time last year that I would report on my experience of MyNametags.ie product because I have a whole swath of crappy “iron-on” labels in my sewing kit. Mind you I was raving about MyNametags to my sister-in-law and my mother piped up something along the lines of “A needle and thread always kept my labels on.” Well after ironing on 35 labels, I’m pretty damn glad I didn’t have to sew them all on.

So what do I think is so good about these particular labels? They stay on. Simple. The iron on labels did not shrivel or fade. No matter if they are sewn on to shirts, polo shirts, trousers or jumpers they held on like limpets. Everything gets washed at 40 degrees and ironed at cotton and they hung on like an enraged terrier.

I ordered a pack of 75 iron on labels and 75 stick on labels – classic style. The package arrived promptly with clear instructions. As mentioned above I used them on cotton, polycotton and wool and whatever the ties are made from and no sticking issues on any of them. Since then not one single label has come unstuck and all remain legible.

The stick on stickers are very handy and as I got our family name with both myself and Himself’s phone numbers included, all of us can use them. The stick on labels are also excellent although I cannot give them an absolute no holds barred rave review as one or two, while remaining stuck firmly in place, did completely fade. However bear in mind that these are stuck on lunchboxes that get turfed into the dishwasher or hot washing up sink willy nilly. I also can’t swear to the conditions in which they were stuck. They stayed on pencils, markers and mathematical set equipment.

I suppose the one and only issue I might have is that the labels and stickers are a little on the small side but I can also see the logic of this too. If they were any bigger they probably wouldn’t work for the pens and pencils. I might try their newer colour labels in three colours to make it easier to sort uniforms because with Nipper 3.0 starting in September this is only going to get more tiresome.

And our score for this year? 1 pair of tracksuit bottoms lost. I’m actually still cross when I think about this. Nipper 1.0 arrives home from swimming in a pair of tracksuit bottoms that are at least two sizes too small and obviously not the brand new ones I had so carefully labelled not two months previously. The other parent had not marked their tracksuit in any way. I contacted all the parents in his class via email to ask everyone to check: nothing. I asked a couple of parents in the class below who do swimming at the same time but didn’t get a huge amount of traction there. What bugs me about this is that there is a parent out there who is so disengaged that they didn’t notice that their child arrived home in brand new tracksuit bottoms two sizes bigger than the pair they went out in. I can only presume that these same parents haven’t laundered the trousers since because, based on my experience, there is no way to get that label off short of excising it with a scissors! Of course, I like an eejit, promptly went into the office to hand over the tracksuit that didn’t belong to us presuming it would only be a matter of time before the other parent did the same. The upshot of that was that Nipper 1.0 had to wear non-regulation tracksuit for the rest of the year because I was damned if I was forking out more cash!

If you have our carefully labelled tracksuit bottoms you can still return them. The harsh judgement is done: can it get much worse than me calling you a negligent parent on my mammy blog?

In my most recent article for Beo! I write about some “essential” technology for what the French call “La Rentree” and marketers here call “Back to School”. Hearty congratulations to all those who received Leaving Cert results this week, especially my nephew in Wexford, who, as expected, sailed through. Phew! If nothing else, folks, you’ve passed a rite of passage of sorts and soon you’ll be consumed by something else. Good luck wherever your road may lead.

Tar éis a dhara lá scoile chualamar a chéad focal Gaeilge a tháinig gan bhrú uaimse. Bhí sé ag déanamh cur síos ar bróga cailín sa chreche. “You know those shoes that have a toy in them? [Me: blank look. Him: continues unphased] Well when she took them off there was a madra in them! A madra!” Mar a rinne Himself cur síos ar san Irish Times an tseachtain seo chaite:

Vinny, whose first child started in a Gaelscoil this week, describes the mix of emotions parents feel. “I was a little nervous. I thought he would be upset, but he was great, and I was dead proud of him when he went in,” he says. “And when he described a dog in Irish at home, he reduced his mum to tears of joy.”

Well now! The big day arrived at last. There wasn’t a wet eye in the house or at the school gate or at the classroom door. We were lucky as he was really looking forward to it; he had already seen his classroom and met Múinteor M, a lovely, pleasant, young woman. He said to me this morning as we arrived in school with two weeks under his belt, “I like Múinteoir M!”

He was looking forward to it as well because he is used to the company of other children and we are grateful to everyone in Cranford Creche in Rathgar for giving him such a good start. But he is an independent, sociable little chap too and his level-headed personality stood to him. Anybody who reads this blog regularly (apart from wasting their time as I don’t write regularly) I’m not a woman to boast but I was very proud that day.

After his second day of school we heard his first unprompted word of Irish. He was describing the shoes of a girls in the creche. “You know those shoes that have a toy in them? [Me: blank look. Him: continues unphased] Well when she took them off there was a madra in them! A madra!” As Himself described in the Irish Times last week:

Vinny, whose first child started in a Gaelscoil this week, describes the mix of emotions parents feel. “I was a little nervous. I thought he would be upset, but he was great, and I was dead proud of him when he went in,” he says. “And when he described a dog in Irish at home, he reduced his mum to tears of joy.”

G is going around singing songs that he got in school. I understand what he is singing because I know the songs but I would give a prize to anyone who could recognise even one proper word or Irish in them! Another thing he said to me that made me crack up this evening when we were counting red cars in his big book of Irish words was “God mum, your Irish is really good!” He must have heard someone say it, probably at the christening we were at yesterday where he was showing off to all the ladies by counting in Irish!

And it was a big day for the little fella too because he started in the new creche. Both of them really like it and the women in the creche are very taken with them especially with how chatty the little fella is. Of course because he is a little brother he was an early to talk and talk and talk! A habit he has at the moment is to say in a very questioning tone, “What’s that airplane?” and you have to say, “Em an airplane?” and he’s happy with that.

And of course it was a big day for Himself as well. He really missed them properly today because it was the first day that he didn’t have to pick G up from school because he was doing a full and the woman from the creche was picking him up. A big long day for Himself but he’ll have enough on his plate in a fortnight so he might as well take it easy while he can!