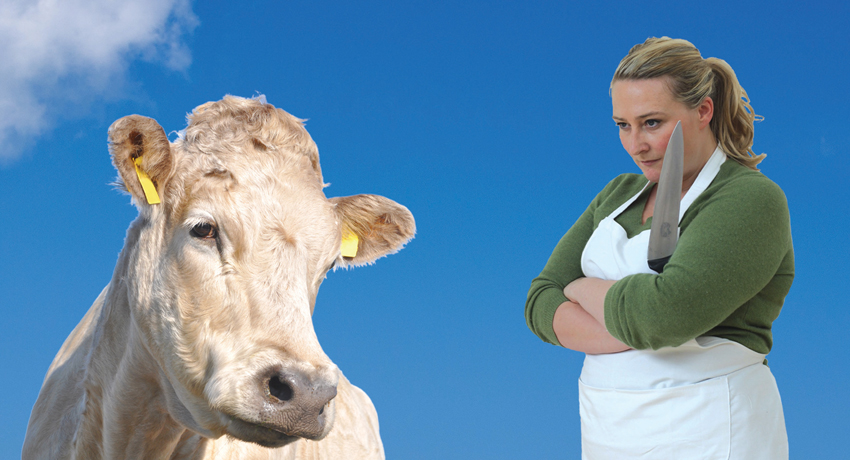 I’m making a concrete effort this year to get to more shows in The Dublin Fringe Festival. Maybe I’m trying to make good on last year’s (yes 2013’s) resolution to see more theatre. I am the cultural bulimic that I may or may not have spoken about during my undergrad viva voce.

Wow, that sentence is full of hot air.

That sentence couldn’t be less like the lunchtime play I attended in Bewley’s last Sunday. Charolais is full of shit. And muck. And blood. Cows. Jeeps. Kitchen tables. In other words, very down to earth, realistic. It’s a one woman show about a love triangle between a woman, her man and his cow with a little bit of his mother thrown in for good measure. Hilarious (guffawing out loud hilarious) and moving, this Show in a Bag is technically excellent as well: minimal set and lighting are augmented by extremely clever but simple costume and hair changes. Written and performed by Noni Stapleton and directed by Bairbre Uí Chaoimh the site for this drama is very much Stapleton’s body, rather than any particular stage, which she uses to great effect. This in itself is a metaphor for the action of the play which is occurring in the bodies of the main character, Siobhán, and her farmer lad’s Charolais, who are both living that which is many females’ most physically dramatic experience: pregnancy.

It doesn’t escape my attention that the last play I reviewed was also situated in the drama of the female body and while Charolais is no less dramatic than Between Water and Trees, it is likely a far more accessible production. Interesting though that two productions that I have attended almost by accident have focused on this topic.

If you fancy a lunch time or tea time pick me up this week (check Fringe site for times) get yourself along to this most excellent and original production.

Ironically this awaited me on my return home:

Next up I hope to see Eating Seals and Seagulls’ Eggs which I understand examines, amongst other things, our relationship with the most hated woman in Irish History: Peig Sayers. 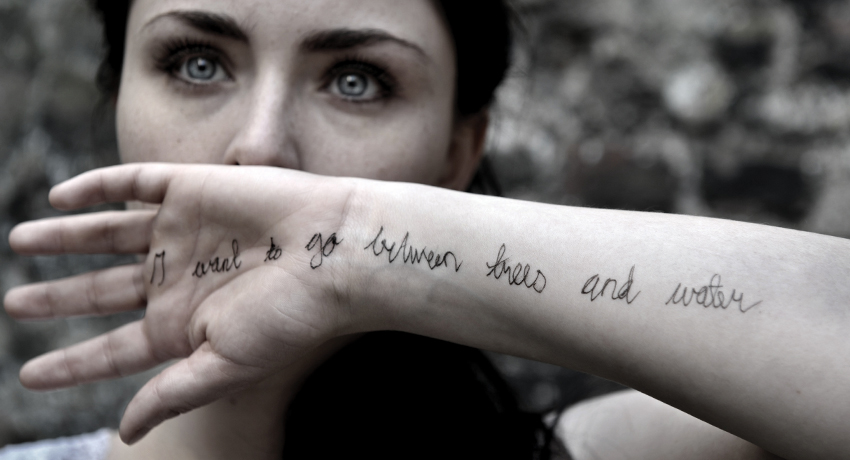 I’m sorry I don’t have enough time to do “Between Trees and Water” the justice it deserves but I’m also conscious that time is of the essence if you are to make it to see this compelling production by Painted Bird Productions as part of the Tiger Dublin Fringe Festival. It runs here in Dublin until Sunday with matinees on Saturday and Sunday at 1pm in South Studios on New Row South.

Based on a collection of documents relating to an illegal abortion in Cork in 1939 the fabulous ensemble acting of the cast and subtle costume, set and lighting weave an evocative piece of theatre. They capture the dun, smoke-yellowed, enamel and brown bottle ordinariness of the lives shattered by this event. Their repeated use of certain words like “responsibility”, “girl” and “married man” remind you of the morals that brought these people into this parlous state. One sequence where the cast members regard the missing victim is particularly thought-provoking. I was not surprised to read in the programme that the director, Fiona McGeown, had studied at L’ecole de mime corporeal dramatique as the physical realisation of a story bound up with the very physical was enthralling. I could not pick one actor from the cast as I felt that the ensemble work was impressive. I could go on but I’ve run out of time.

Go and see it before it’s gone. I’m off to Charolais on Sunday so another review to follow. Special thanks to my good pal Aoife for getting me out of the house and down to this show 🙂