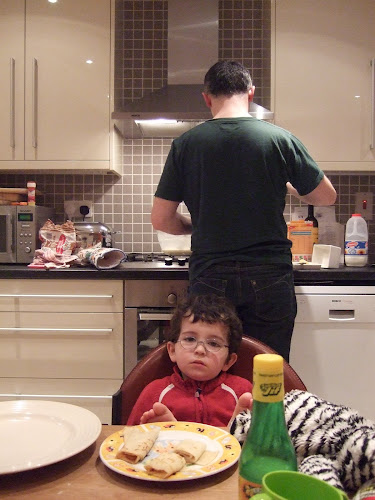 So my Ada Lovelace Day post is a lot late. Ironically it is because I was so busy looking after our own Ada! I have great hopes that in 30 years time I will be able to write about her on Ada Lovelace Day!

Today is Ada Lovelace Day and bloggers are encouraged to write about women in technology and science. As the holder of not one but two Masters (or Mistresses!) of Science I feel downright obliged to take up this challenge. However as one of those MScs has been described as a “MSc for drawing pictures” and the other is in the social sciences you will understand that my take on science and technology might be a little broader than most. Rather than writing about one woman in particular I have decided to write about all the women who have inspired scientific thoughts in my mind over the years.

No time right now to write but I have just polished off and published a rant from a few weeks back. I was ranting about working parents because it was all the rage at the time. Please leave comments especially if you have points that you think I should make to my local TD, the Minister for Children, Minister for Education etc.

Also don’t forget to check out that lemon meringue pie. Oooh it was delish. I might make more this weekend to try and perfect it. It’s only 11am and I am hungry.

but how sharper than a serpent’s tooth it is to have a thankless society to paraphrase Shakespeare. I’ve just had three days of worry. I was worrying about who was going to mind my children, how we would afford it, how we would manage it and still get to work on time. (In the Mythical Company as Richard Nelson Bolles calls it) Thankfully all is sorted for the time being. It will be a military operation on a par with Caesar’s manoeuvres at Thapsus. (I have no idea what I’m writing about but we got the box set of Rome as a Christmas present from Lilbro so I though I would chuck in a classical allusion. Fancy huh?)

And all of this planning for next September! All I can say is I am so glad I put the eldest’s name down for his school in early 2004.

However I am planning to write to my TDs about this issue. For the first time I feel like the lack of formal childcare in this State could undermine my opportunities as a working mother. I know it was my choice to have children but if I didn’t have children I also wouldn’t bother recycling or voting or caring about the future. As an atheist my children are my ultimate raison d’etre: they will carry on my genes and memes according to the doctrine of Richard Dawkins.

But I’m not just concerned about the lack of formal childcare for my children, I am concerned about it for all children and all parents. Himself and I are not the only parents in the world who have either ambition or a sense of duty. I work and choose to work in non-profit or public service as I have a strong motivation to improve the lives of others. (“Thanks Rosie” said the public that I serve, “but really could you just mind your own business?”) Some might argue that putting my energies into the Irish Language is a waste of that public service motivation – I don’t think so. But I do feel it’s a waste, when I pay my taxes, work really hard, recycle, do volunteer work, speak Irish to my children, improve your life by boring you to tears about it all and then more than half my wages, fully taxed go on childcare. Who the heck am I promoting the language for? Who the heck am I trying to improve society for? (For whom the heck – just doesn’t have the same ring to it) During my research about voluntary activity last year, one of my respondents, having given a lot of time and expertise as a volunteer, commented that she sometimes felt that she was being used by the government. I would be interested to know if this feeling was prevalent among volunteers.

Now while I am the first to object when schools are blamed for not educating children about nutrition or exercise or sex (why can’t the parents take some responsibility I ask) I also think that the government are getting a bit of a free ride. It’s nonsense to say “It was your choice to have children.” or “What about those who can’t have children?” I don’t own my children. I didn’t have them just for me. If one of my sons grows up to invent the transporter (fingers crossed, fingers crossed!) do you think he is going to say, “I’m sorry, do you have any children? No? Well then you cannot use my transporter as you have done nothing to contribute to its invention. You weren’t willing to pay a little more tax so that I could have a really good quality, well-regulated education, in a fine building, with proper resources and well-trained teachers.” I wouldn’t mind paying nearly 2 grand in crèche fees a month if I though that the government were investing even half that amount again per month per child in the country.

My next rant about parenting will be about valuing fathers.

Kate Holmquist among others had a wry look at the issue of working mothers recently. (Subscription required)

15/02/2007
Also Susan Pinker has just written a book about the physiological make-up of women and how that might affect their willingness to aim for top jobs. At least it will make a very interesting addition to the debate about mothers working. There was an excerpt in last Sunday’s Sunday Times News Review.

My New Year’s Resolution has been resolved! I got a letter printed in the Irish Times today. Only slightly edited.

A chara, – Mary Maher (November 10th) is quite right in her advice to working mothers to get the correct information and act on it. Legislation does indeed exist which is intended to protect mothers from inequality in the workplace.

However, employers are well informed by Government and employers’ bodies about the same legislation – so well informed that no mention of the real reasons for isolation or demotion (‘Are you planning on having more children?’) would ever escape their lips.

It is not possible to act upon a perceived bias. The onus is on the working mother to prove that genuine inequality has taken place. Speaking from experience, there aren’t enough hours in the day. – Is mise, Roseanne Smith”