I’ve just posted my top ten tips for all you new cyclists over on the DublinBlog so check it out before you do any damage! Even though I won’t be using the new Dublin Bikes service myself I think we will head into town on our bikes today to see how it’s all going and maybe meet up with some new cycling enthusiasists.

I do think that since the recent Government tax break for cyclists there are more cyclists in the city. I have noticed more bikes parked in the bike park in work. It was especially noticeable yesterday along the Dublin Seafront Cycle path between Marino and Sutton. It was a gorgeous day in Dublin yesterday and while we were in the car driving to Portmarnock (I know shock! horror!) I noticed many people cycling along this great route. I think it’s a real missed opportunity that Dublin City Council and Fingal County Council didn’t work out the scheme to include stations at either end of this route. It is a lovely and safe route with lots of interest to see along the way and plenty of pitstop points by the looks of things.

Were I not 4 months pregnant, I would have considered doing this cycle ourselves although the first chunk from Dublin 12 to Marino would have been horrible. While I am still cycling, it’s just short punts rather than mammoth journeys like this.

I’m just off the phone from another cycling buddy who is in the city centre and says she has not seen a single bike yet. However Rapture Ponies posted this photo to twitter a little while ago so there is evidence to the contrary.

At the Irish Blog Awards in February I answered a call made by Red Mum. While collecting the award for Best Group Blog for the Dublin Community Blog she invited the audience, especially people from Dublin, to get involved. I volunteered. Note that was in February. I have finally written a post for the blog. It’s about National Bike Week, kinda. Have a read and maybe see you at some of the events next week! 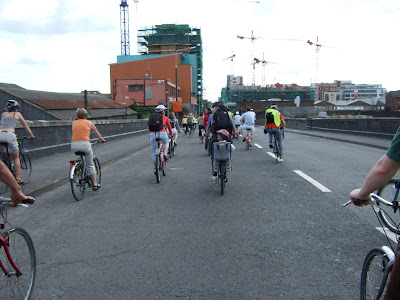 A number of Irish bloggers were recently writing about their pet peeves. I didn’t get in on it at the time but I saw something today that reminded me of one of mine. I absolutely cannot stand people who litter. I often point out to people that they have dropped something at considerable risk to myself. Since I moved to Crumlin I’ve had to rein in this habit. However there is one young lady currently residing either in Lower Dublin 12 or Upper Dublin 6W and if I see her again tomorrow I am going to have a sharp word with her. This morning, which was truly filthy, as I cycled schoolwards I passed a young lady standing at a bus stop. She had an umbrella and it was in tatters. I dropped the eldest into school (more anon as Gaeilge!) and turned around to head into the Digital Hub where I work. What did I see on my way back? The young “lady’s” umbrella on the side of the road. Not only was it a disgraceful piece of littering but it was also a danger on a very busy road on a very wet morning. When I had passed her originally I thought she looked like she was going to chuck it and I said to myself “Noooo!” I considered stopping to discuss it with her but I was laready running late with the weather and I thought again, “No there’s no way a smart-looking young person like that could be so ignorant.” Now the only other thing that has just occurred to me is that maybe some other ignoramus had chucked it and she had picked it up and was considering what to do with it. No I’m being too nice to the total ignoramus. If I see her tomorrow, she is getting a piece of my mind. Scumbag

Listen in to Republic of Loose as they play live on Raidió na Life this coming Friday 18 July morning between 10 and 11 a.m. on Aoine A.M.